As a Phillies fan, it has been a tough season, but I enjoyed watching Chase Utley in the 2014 All-Star Game. Ultey had two notable plate appearances – he hit a towering double in his first PA and was hit by a pitch in his second PA. If you know anything about Utley, he know that he tends to get hit by a pitch, so this event during the All-Star Game seemed in character.

Anyway, this observation motivated a few questions. First, how has the tendency to be hit by a pitch changed over seasons? Second, who are the HBP stars, that is, players that tend to have high HBP rates?

We use the Lahman season data. Below the variable “location” is the name of the folder where I have downloaded the Lahman text files. I read in the Lahman batting data and stored it in the data frame Batting.

Using the merge function, I add the players’ first and last names from the Master file to the Batting data frame.

The function hbp.work will summarize the HBP data for all hitters in a particular season. Here are the things that the function will do. (I illustrate functions using the dplyr package.)

Illustrate this function for the 2008 season.

I collect HBP estimates for all players for the seasons 1960 through 2013.

Graph the logits of the HBP estimates for all players with at least 300 PA using the ggplot2 package. 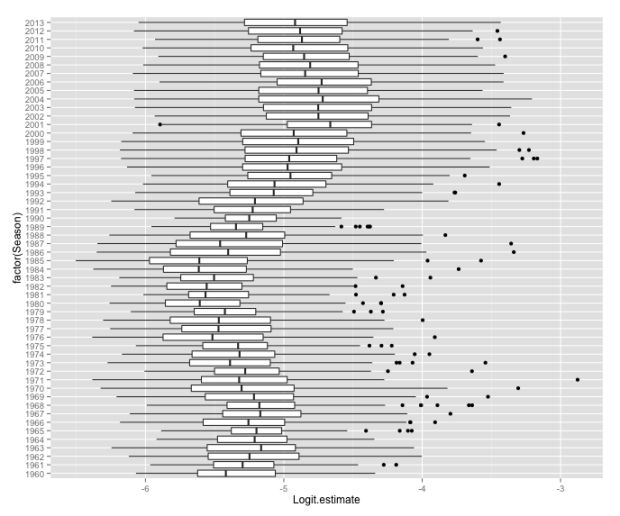 There are some interesting things that we see from the graph.

The Outlier variable in the data frame indicates all of the HBP outliers — by tabulating this variable, we can learn who were the HBP stars during the 1960 – 2013 period. It turns that there were only three players who were outliers for 5 or more seasons: Don Baylor (11 seasons), Ron Hunt (7 seasons), and Chet Lemon (5 seasons). By the way, it interesting that Craig Biggio has more career HBP than Baylor, but Biggio only appeared as a HBP outlier for three seasons.