A model for home runs

Let y denote the number of home runs hit by a team in an individual game — this is typically a small number like 0, 1, 2, 3, etc.  I will assume that home run numbers for all of the 2016 games follow a negative binomial distribution with parameters size and mu (I am using the R syntax for the dnbinom function).  The parameter mu  is the mean number of home runs and size is a dispersion parameter.  (By the way, this is a better fitting model than the Poisson distribution which has only one free parameter.)  To complete this model, I assign a vague, noninformative distribution to the parameters mu and size .

From Baseball Reference I am able to collect the number of home runs hit by team per game — there were over 4500 sampled values of y.  I fit the Bayesian model — I got estimates of 1.17 and 9.95 for mu and size , respectively.  I can approximate the posterior distribution of (mu, size) by a bivariate normal distribution with mean vector (1.17, 9.95) and an associated variance-covariance matrix.

How many home runs will be hit?

I have graphed the predictive distribution of the number of home runs hit in the remainder of this season below and overlaid the target of 273 to reach the 2000 season total. 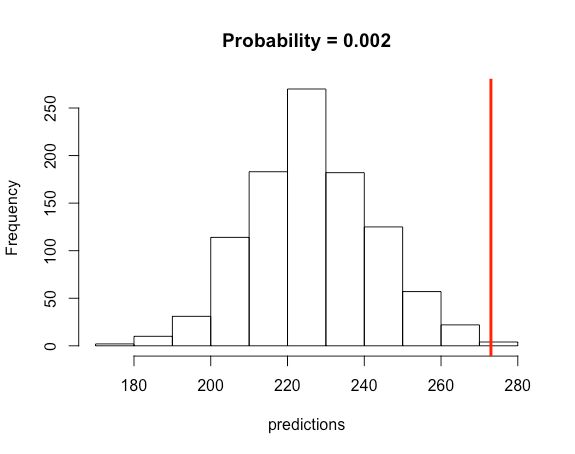 What have we learned?

Although this has been an interesting exercise, maybe we asked the wrong question.  What is more important is maybe not the number of home runs hit, but rather the rate of home runs hit.  Looking quickly at Baseball Reference, we see

Another question is why — what is causing the increase in home run hitting in 2016?  I have not done a careful investigation, but I think part of the answer is the players’ approach to hitting — a large fraction of the scoring in baseball is due to home runs.

The 2016 season just concluded and the total number of home runs hit is 5610, which means that 5610 – 5420 = 190 home runs were hit in the final week.  Interesting, 190 falls in the left tail of my predictive distribution.  This might suggest that my assumption that the mean number of home runs hit per game did not change across the season is incorrect.  I suspect that some of the teams making the playoffs were playing their subs, but it is unclear what impact this would have on home run hitting.  It is notable that the 2016 home run rate was 5610 / 165561 =  3.388 which did not exceed the 2000 home run rate of 3.403%..