Last week I looked at how the spin rate (tracked by Statcast) impacted swinging strike probabilities by pitch type. As a followup, this week I wanted to find out which combination of spin rate vs. velocity led to the most “soft contact” during the 2015-2016 seasons. To do so I utilized the generalized additive models (GAMs) method that I have used previously. Soft contact is a bit of a catch-all phrase, but for these purposes I’m defining it as a pitchers ability to consistently induce batted balls that have high probabilities of being converted into outs. This line of thinking goes against the modern pitching analytics, examples of which include batting average against balls in play (BABIP), fielding independent pitching (FIP), and expected fielding independent pitching (xFIP) previously developed that theorize a pitcher can’t control what happens after a ball is put into play. Now that we have Statcast data that provides measurements such as exit velocity and launch angle (among others), it is possible to, at the very least, attempt to quantify the impact a pitcher has in inducing soft contact.

One could argue that the requirements for soft contact that I’ve established are too conservative, but I wanted to make sure that I was rewarding the process over the results by not giving a pitcher credit for a hard hit groundball that they were fortunate did not turn into a hit. That being said, my methods for determining soft contact still come with an unfortunately large grain of salt. Not only does the Statcast tracking system not take into account every single batted ball in play, the batted balls in particular that Statcast fails to track are balls with either extremely low launch angles or extremely high launch angles. In other words, a sizable portion of weak groundballs and/or popups are being missed by the Statcast tracking system and thus can’t be included in my analysis. There have been some attempts at imputing the missing Statcast data, but unfortunately this does help us duplicate the missing pitches spin rate. With these caveats in mind, I created another GAM based on all balls put in play during 2015-2016 and calculated the probability of soft contact based on spin rate vs. velocity for each pitch type. In the table below I’ve listed out each pitch type’s mean spin rate, standard deviation of spin rate, and sample size for batted balls in play during 2015-2016.

Fastball Soft Contact Probabilities: Immediately when looking at the four seam fastball plot above we see a difference in how spin rate affects soft contact vs. swinging strikes. While higher spin rates allowed four seamers to “rise”, and have greater swing and miss potential, lower spin rates appear to be more adept at inducing soft contact for four seam fastballs. There are a couple of reasons for this: one is that four seam fastballs are traditionally not seen as a “pitch to contact” pitch, and when batters do make contact with higher spin rate four seam fastballs they are traditionally hit as fly balls and thus would not be included in my definition of soft contact. I didn’t include fly balls as examples of soft contact for the simple reason that if you give up too many of them some continue to travel over the outfield fence. Case in point Max Scherzer, owner of one of baseball’s most effective four seam fastballs, and the winner of the 2016 NL Cy Young award, has given up the fifth most home runs (fifty eight) among qualified pitchers since the start of the 2015 season. Sinker soft contact spin rates follow the line of thinking that the less spin on a sinker = the less likely the sinker acts like a four seam fastball and stay up in the zone to be hit hard. Zach Britton’s rise from discarded starter into Cy Young contending reliever is due primarily to his outstanding sinker that combines high average velocity (~97 mph in 2016), and below average spin rate (~2070 rpm). The soft contact probability results for cutters did surprise me, as the plot above shows that cutter spin rates appear to have minimal impact in inducing soft contact when combined with velocity. Since a high spin rate played such a big role in increasing the swinging strike probabilities for cutters, I assumed that this would hold true for soft contact, but I was incorrect. It’s possible that the highest spin rate cutters produce batted balls that are lost in the Statcast tracking system due to extreme low launch angle. That would explain Kenley Jansen’s 2015-2016 balls in play results as he seems to give up nothing but weak groundballs off of his high spin rate cutter.

Breaking Ball Soft Contact Probabilities: It’s tough to take away too much from the breaking ball soft contact probabilities plots above as pitchers typically aim to throw breaking balls on the edge or out of the strike zone in an attempt to generate swinging strikes. Breaking balls that do stay in the zone are usually there by mistake and get hit hard more often than not. Slider soft contact probabilities seem to be the most unaffected by spin rate with the lowest spin rate actually generating the highest soft contact probability. However, curveball and knuckle curve spin rates seem to have a large effect on soft contact for these pitches. Perhaps no where was this more apparent than in Justin Verlander’s near Cy Young winning 2016 season. Check out Verlander’s improved curve ball metrics, alongside his increased average curveball spin rate below for the 2015 and 2016 seasons:

Obviously Verlander’s improvement in health was the primary key to his stellar 2016 season. But his increased success with his curveball, whose spin rate increased nearly thirteen percent from 2015 to 2016, was also a factor to Verlander returning to form. Along this same line of thinking, a knuckle curves soft contact probabilities also increase with increased spin rate. This makes sense as four of the most successful relief pitchers (Dellin Betances, Mark Melancon, Craig Kimbrel, Wade Davis) in 2016 all possessed above average spin rates on their knuckle curves during the 2016 season (2801 rpm, 2713 rpm, 2554 rpm, 2492 rpm, respectively). 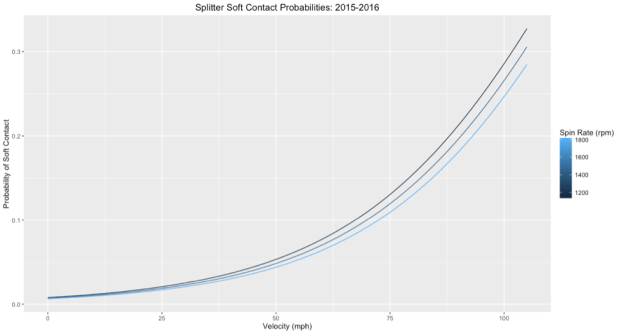 Offspeed Soft Contact Probabilities: Both changeups and splitters see their soft contact probabilities increase with lower spin rates. Jose Quintana, Dan Straily,and Danny Salazar are all examples of pitchers who were able to mix low to mid eighty (plus) mph changeups with below average spin rate to successfully induce soft contact. With regards to splitters, Junior Guerra resurrected his career in 2016 with the Brewers largely thanks to his splitter which had a well below average spin rate (1013 rpm) combined with an average velocity of nearly eighty six mph. It will be interesting to see if Jeurys Familia, owner of baseball’s best splitter, picks up where he left off with the pitch in 2015 (splitter thrown ninety times in seventy eight innings), after virtually scrapping it in 2016 (splitter only thrown twenty seven times in seventy seven and two thirds innings).

I realize that this is a lot to take in so I’ve prepared a summary table below that details which type of spin rate has a greater chance of inducing a swinging strike (taken from my previous analysis), and soft contact for each of the eight pitches I examined.

Curveballs, knuckle curves, and splitters were the only pitch types out of the eight analyzed that have the same type of spin rate that increases both swinging strike probability and soft contact probability.

I would caution against drawing grand conclusions from this analysis as this data only goes back to the beginning of the 2015 season, and as mentioned previously the process that Statcast uses to gather data does not yet include every single pitch or ball put in play. It will be interesting to see going forward if spin rates will be treated like analysts treat BABIP now, as in there will be a league wide average spin rate for each pitch (like there is with BABIP now), but some pitchers will be able to achieve sustained success by having a higher or lower spin rate with a certain pitch (similar to what Chris Young has achieved with BABIP). Regardless it feels good to peel back a part of the baseball onion and have a metric that can assist in quantifying the reasoning behind the success of Rich Hill’s curveball or Zach Britton’s sinker. If only we had this type of information when Greg Maddux was in prime dealing sinkers left and right.