Baseball, as we all know, is going through some significant changes.  Strikeouts and home runs are up, hits are down, and games are getting longer.  What is the impact of these changes on measures of performance?  Here I’ll explore visually how the distributions of batting averages of regular players have changed from 1995 to the current season.  I’m doing this study for several reasons — first, it is an interesting thing to explore, and second, it will give me an opportunity to demonstrate different ways of displaying many distributions of data. (We are currently talking about comparing distributions of quantitative data in my graphics course, and my data science students shortly will have a graphics miniproject.)

A basic thing to try is to simply plot the AVG against the Season for all seasons which I show below. This is a poor graph since there is significant overplotting and one cannot see where the AVGs are concentrated.

A simple way to improve the scatterplot is to vertically jitter the points which I show below.  Now one gets a better sense of where the AVGs are distributed and the outliers (like Chris Davis’ 0.168 AVG in 2018) are more clearly distinguished.  I am not that enthused about this graph since one still has significant overplotting. 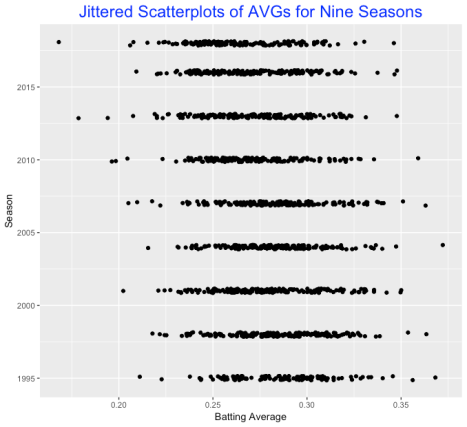 When one wants to compare distributions, a common strategy is to plot means together with some “error bars” indicating variability about the means.  Below I show the mean AVGs where the error bars add and subtract one standard deviation of AVG.  I don’t like this graph for several reasons.  First, it will not be obvious what is being graphed.  If you are primarily interested in the error in estimating the mean, then you would plot the mean plus and minus a standard error which is the standard deviation divided by the square root of the sample size — that is not what I am plotting below.  Also this graph is only showing the middle 2/3 of each distribution so much of the distribution is not graphed.

I like showing parallel boxplots of the AVGs as shown below.  I like boxplots since they clearly display the middle 50% of each distribution (the box component), show the tail components (the whiskers of the boxplots), and set apart individual AVGs that are either too large or too small.  We see several interesting things:

One problem with boxplots is that they are a bit discontinuous in appearance and one might prefer smoother estimates of the distributions.  A violin plot is a modern graphical method of displaying a distribution– basically it is a mirrored version of a density estimate display. I show parallel violin plots of the AVGs below.  One gets a better sense of the shape of the AVG distributions in this display.

One thing that is missing is some indication of a typical AVG in each distribution.  Below in my  “violin plots plus” display where I add the mean AVG as a red dot.  Like the medians, the mean AVGs have been decreasing over time.

A new attractive way of comparing distributions is by so-called ridgeline plots where you show overlapping density estimates as shown below.  What is interesting here is that I get a better sense of the shapes of these AVG distributions.  Note that the AVG distribution in 1995 appears bimodal with modes around .260 and .300 with the .300 mode more popular.  In contrast, the 2018 AVG distribution is bimodal but in a different way — the more popular mode is .250 with a smaller mode at .290.  This might be worth exploring further — at least, it questions the common assumption that AVGs are bell-shaped. 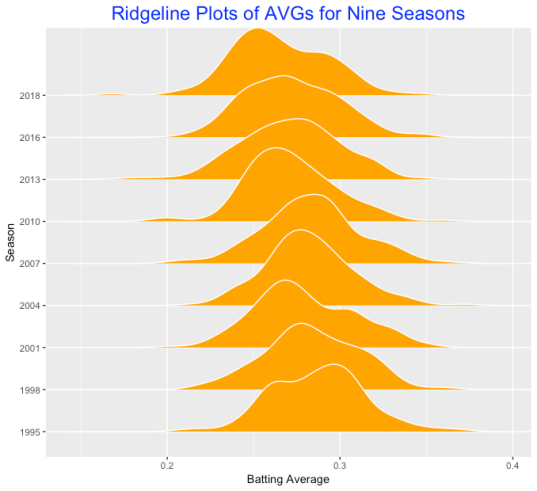 Here’s some general advice about comparative distributions of numeric data.

All of the R code to obtain this data and construct these plots is available on my GithubGist site.