R code for Probability of Hit Given Three Variables

Back in a January post, I showed some interesting graphs showing how the probability of hit depends on launch angle, exit velocity, and spray angle.  Recently a reader asked about the R code to produce these graphs.  So I will provide the code here and give an outline of the R work.

You might ask how the probability can be 1.55029?  Actually, this is only the predicted logit — if you back transform by an inverse logit, you get a predicted probability of 0.825 — it is likely this batted ball is a hit.

5.  Now I construct a graph to show the effects of the three variables — I set up a grid of values of launch angle, launch speed, and adjusted spray angle, and compute the predictions on that grid.  Here is one of the graphs I constructed. 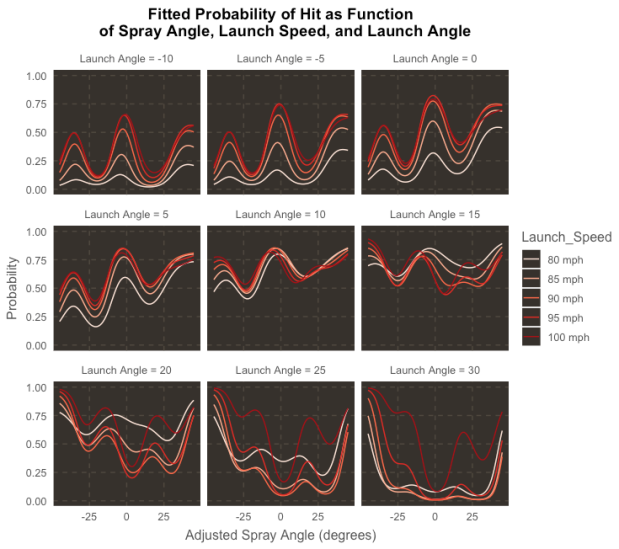 Obviously there many uses for these predicted probabilities.  For example, I’d be curious in exploring how different teams are reducing (or maybe increasing) these hit probabilities based on their defensive alignments.  That is, we’d be interested in looking at the residuals from these predictions and see which variables (like defense) are contributing to variation in these residuals.

But for now, I wanted to provide the details on the R work that can be found on my GitHubGist hub site.